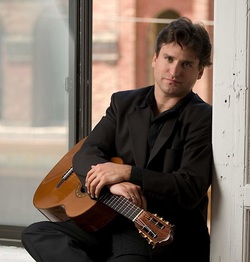 Rene Izquierdo, a native from Cuba, graduated from the Guillermo Tomas, Amadeo Roldan Conservatory and Superior Institute of Art in Havana. In the United States, Mr. Izquierdo earned a Master of Music and an Artist Diploma degrees from the Yale University School of Music, where he studied with Benjamin Verdery. While at Yale he represented the university in an exchange program with the Conservatoire National de Musique et de Danse du Paris and worked with guitarists Olivie Chassain and Roland Dyens.

Rene has appeared as a guest soloist and in chamber music concerts throughout the United States, Cuba and Europe. He has shared the stage with prestigious guitarists including Eliot Fist, Benjamin Verdery and Jorge Morel, as well as renowned flutist Ransom Wilson, soprano Lucy Shelton, David Jolley and Paquito d’Rivera.

Belarusian guitarist Elina Chekan and Cuban guitarist Rene Izquierdo have been playing as a duo since 2012. The couple first met at Yale University when they were both pursuing post‐graduate degrees, studying with acclaimed professor Benjamin Verdery. Duo Exaudi was created out of the desire of both guitarists to join forces in their creative endeavors, and work towards increasing and exploring the guitar repertoire in this new medium.

As a duo they have performed in major concert venues in the United States, Russia and Europe to great critical acclaim. Both award winning artists, they are together a tour de force. Duo Exaudi’s commitment to contemporary music and to the expansion of the guitar repertoire has led them to collaborations with composers such as Jorge Morel, Carlos Rafael Rivera, Colette Mourey, and Carl Schimmel.

raised for their phrasing and musical sensitivity, Duo Exaudi’s playing is technically superb, well balanced and exceptionally musical. Their debut CD will be released in the Spring of 2014. They are both currently faculty at the University of Wisconsin‐Milwaukee.