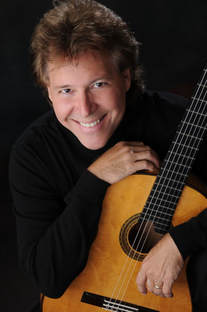 Acclaimed by The New York Times for “effortless virtuosity with intelligence and good taste,”  and by El Nuovo Dia (Puerto Rico) as a “magnificent North American guitarist, full of virtuosity, magnificent technical precision, and a masterfully delivered diverse range of sound,” Stephen Robinson tours extensively as a recitalist, collaborative artist, and orchestral soloist.  He performs at leading institutions and festivals worldwide and has appeared as guest soloist with orchestras including the Cincinnati Symphony and Boston Pops Orchestras.

Robinson’s eight recordings for Clear Note Records, Centaur Records and Lakeside Records have received unanimous critical acclaim, with his most recent Clear Note release, Imagine hailed as “a CD which will rise toward the top of the listener’s playlist” (Jim McCutcheon, Soundboard). McCutcheon continues, Robinson “played with a spaciousness in which only a masterful musician can transport the listener to that nirvana-like level of pure being.”

Of his disc, Stephen Robinson, Munich’s Fonoforum states, “A guitarist of the first order … Robinson fills the melodic lines with a great individual emotion.” His solo CD, An American Record, features the debut recording of works by Samuel Adler, Harold Blanchard and Harold Schiffman, which Soundboard calls “masterful and poetic.” Robinson’s release on Clear Note Records, Felicidade, is an eclectic mix of music.  Soundboard’s Richard Long writes, “Stephen is a guitarist who invariably reminds me of why I fell in love with the guitar many years ago; to put it simply, he plays beautiful music, and he plays it beautifully.” And Steve Marsh of Classical Guitar said “Occasionally a CD comes along in the review stack in which the featured performer immediately stands out from amongst the others for their sheer musicality, technical virtuosity and ‘listenability’ factor — and this new release from North American guitarist Stephen Robinson is such a CD.”

Clear Note Records release of Robinson’s CD, Découpage, is a collection of works spanning nearly three centuries, combining recent jewels with timeless standards. Steve Marsh of Classical Guitar noted, “This CD has to be one of the most attractive ones I’ve listened to in quite a while. Robinson’s musicianship is of the highest calibre, his effortless technique allowing him the freedom to do with this music just about anything he wants and what he does do is exceptionally good from every angle. This is music making of high order.”

Stephen Robinson has garnered numerous international and national awards, fellowships and grants, including several from the National Endowment for the Arts.  He has served as a Fulbright Fellow to Canada, and has been honored twice by Stetson University’s Hand Award for Excellence in Research and Creativity for his unparalleled performances and recordings.   A top prize winner in five major international competitions, including the XXIII Concours International de Guitare in Paris and the VI Concurso Internacional de Guitarra in Venezuela, Robinson is an alumnus of the distinguished Affiliate Artists Touring roster and a member of the State of Florida Touring Program.

A native of New York, Stephen Robinson began his guitar studies with Bruce Holzman at Florida State University, and worked closely with Andrés Segovia, who called him “a magnificent guitarist, one of the most brilliant guitarists of our times.”  After pursuing graduate work at the Yale School of Music, Florida State University awarded Robinson its’ first Doctor of Music in Guitar Performance.

Dr. Robinson is Professor of Music at Stetson University, where he founded and has directed the Guitar Program since 1983.  His alumni have excelled in the finest graduate programs of Yale University, The Eastman School of Music, The Peabody Conservatory, Florida State University, and University of Southern California, among others, and many now hold prominent positions in the professional world.   Stephen Robinson resides in Florida with his wife, Patrece, and together they have raised four sons and have four grandchildren.  He performs exclusively with D’Addario Strings and plays a 2013 Antonius Müller guitar.