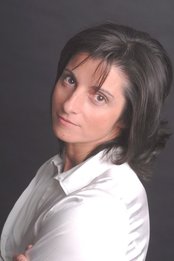 Olga George has studied Acting at the American Academy of Dramatic Arts in New York, IPA Speech Training system under Sousan Finch and Pamela Prather in New York, Classical and Modern dance at the American College of Greece as well as Kinesiology and Mime at the Atelier de Movement of Monika Pagneux and Phillippe Gaulier in Paris.

Furthermore, she has attended Neuro-linguistic programming (NLP) at Natural Health Science and is a qualified NLP Practitioner.

She was trained under Anthony Robbins and in cooperation with the Academy of Self-Improvement in Zurich, and under Mike George at the BK World Spiritual University.

She has worked as a group coordinator of Goal Achievement and Self-expression through expression and speech, and has been an acting coach to actors and other professionals.

She has been working as an actor, director and producer in Greece, Denmark, Germany and U.S.A. She teaches the Sanford Meisner and Uta Hagen acting techniques from the American Theatre School, combined with self-confidence and behavioral expression exercises.

She is a Fulbright and an American Academy of Dramatic Arts scholar.