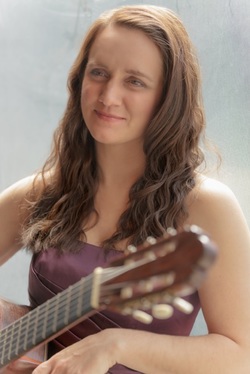 Classical guitarist Lynn McGrath is being heralded as a phenomenon. Blending her passion for theatre, Spanish Language and Literature and guitar, she has shared the poetry and music of “Platero y yo” with audiences on 4 continents as both guitarist and theatrical narrator, an unprecedented feat.  Bringing the writings of Nobel laureate Juan Ramón Jiménez to life for audiences across the globe, from children in a Peruvian orphanage to guitar connoisseurs at the Guitar Foundation of America Festival, one critic wrote the following “…wonderful timing, poise, wit, and grace, while getting a full rich sound from her guitar. Anyone who loves either music or poetry would have been charmed, but those who appreciate both, not to mention stage presence and acting skills, were electrified by this tour-de-force of artistic multi-tasking. —Richard M. Long, Editor, Soundboard

A touring soloist, chamber artist, and respected pedagogue, Lynn McGrath has appeared in North America, South America, Europe, and New Zealand as performer, lecturer, and an adjudicator of a number of international and national competitions. With appearances at the Nikšić Festival (Montenegro), Silesian Guitar Autumn Festival (Poland), the Guitar on the Mediterranean Festival (Italy) as well as concert tours in Peru and across the US, Lynn has been invited to share her music and expertise with a wide range of audiences. She has presented at the Victoria Conservatory of Music, Oberlin Conservatory, the University of Veracruz, and Mannes College and appeared at venues including the Troy Savings Hall (NY), The National Hispanic Cultural Center (Albuquerque), and the Skirball Cultural Center (LA) in addition to performing on radio stations in the Southwest and along the East Coast. In June of 2015, Lynn performed in 6 cities in New Zealand and on New Zealand National Radio.

In addition to solo performances, Lynn McGrath is a member of the highly acclaimed Tantalus Guitar Quartet, and former member of the trio, Presti. She has been a soloist with the Orchestra of Northern New York, performed with the Albuquerque-based choir Quintessence, and the Santa Fe Opera. After receiving degrees in Spanish Language and Literature as well as Education, she completed a music degree with Douglas Rubio at the Crane School of Music, SUNY Potsdam (where she taught as a full-time instructor) and went on to earn a MM and DMA from the University of Southern California, studying with such luminaries as William Kanengiser, Pepe Romero, and James Smith.

Presently living in Albuquerque, New Mexico, Lynn established a guitar program at Sandia Preparatory School, teaches for Central New Mexico Community College, and is the Director of Regional Symposia for the Guitar Foundation of America. A highly sought-after private teacher, her students have been accepted, and many have received full scholarships to, some of the best undergraduate and graduate schools in the nation, have placed in international competitions, and have been featured on NPR’s “From the Top”. In 2016, Lynn will be joining the faculty at Oklahoma City University, which boasts one of the fastest growing guitar programs in the nation, offering undergraduate and graduate degrees in performance, music education, and music business.