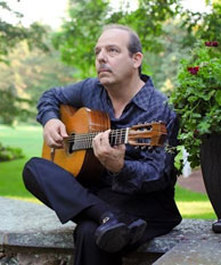 Mr. Del Casale has been performing as a soloist and chamber musician since 1983 as demonstrated on his CD, Zenobia. Mr. Del Casale’s love for the ensemble format has afforded him the opportunity to work with a variety of distinguished artists over the years. The New York Times and other industry periodicals have praised Mr. Del Casale’s artistry and musicianship. Since 2003 Mr. Del Casale has assisted the Brazilian guitar virtuoso Maestro Carlos Barbosa-Lima in concert as the Maestro’s duo partner. It is this collaboration that Mr. Del Casale is most recognized.

In 2008 Mr. Del Casale was the featured soloist at the New York Guitar Seminar at the Mannes College of Music where he was an invited to perform a set of solo guitar compositions by Ernesto Cordero. The New York Times praised Mr. Del Casale’s interpretations.

In 2010 Barbosa-Lima and Del Casale were guest performers on WNYC, Sound check, with host John Schaefer and a few days later both guitarists appeared for a third time at Weill Recital Hall at Carnegie Hall.

Mr. Del Casale is a graduate of The Mannes College of Music where he studied under the eminent Albert Valdes-Blain and later with guitar virtuoso, Michael Newman.