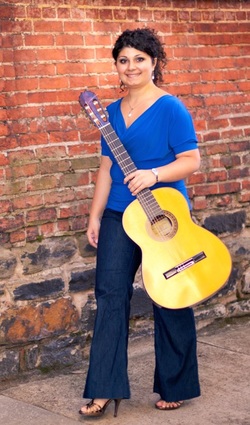 Widely admired for her technique and artistry, Armenian guitarist Gohar Vardanyan has performed throughout the United States for numerous guitar societies, universities, and arts organizations, including the Smithsonian Institution in Washington, DC, Alice Tully Hall at Lincoln Center, and guitar societies in Seattle, San Francisco, Philadelphia, Houston, Miami, and New York City to name a few. She has appeared on National Public Radio in the United Stated and Radio Nacional in Argentina.
Ms. Vardanyan has performed as a soloist with the Great Lakes Chamber Orchestra and Panama National Symphony Orchestra. She has also been a guest artist at the "Encuentro Internacional de Guitarra" in Panama and the Hamilton International Guitar Festival in Canada. Interviews with Ms. Vardanyan have appeared in various publications, including Gendai Guitar Magazine in Japan and the May 2014 cover of Classical Guitar Magazine. Guitar International Magazine has described her as "the complete package," "with a musicality and emotional quality . . . that one would expect from someone much older than the young wunderkind. Not only is she able to draw you into her performances with engaging musical interpretations, but she has the technical facility that is required of any concert level guitarist." Her playing has been described as "passionate," "evocative," and "virtuosic."
In addition to her performing career, Ms. Vardanyan is an avid teacher. She frequently teaches master classes and guitar technique workshops on during her concert stops. Ms. Vardanyan is an author of three books from Mel Bay Publications. She's a frequent writer on Mel Bay's Blog and instructor on Strings by Mail's YouTube Lessonettes, a series of mini video lessons.
Ms. Vardanyan began studying the guitar in her native Armenia at the age of five under the careful guidance of her father, Vardan Vardanyan. At the age of eight, she gave her first public performance and also appeared on Armenian National Television. She was the first prize winner in the Armenian National Music Contest "Amadeus" and was accepted into the prestigious group, "New Names," for talented young musicians.
She performed in numerous concert venues in Armenia, including Komitas Chamber Music Hall and the Small Philharmonic Hall. She went on to study with Antigoni Goni at the Pre-College Division of the Juilliard School. In 2001, Ms. Vardanyan studied with John Wunsch at the Interlochen Arts Academy. She was awarded the Young Artist's Certificate from Interlochen Center for the Arts and the Harold Randolph Prize in performance from the Peabody Conservatory.
Ms. Vardanyan holds a Master of Music Degree from The Juilliard School where she studied with Sharon Isbin, and a Bachelor of Music degree from the Peabody Conservatory of Music where she studied with Manuel Barrueco. She is also an alumna of the Aspen Music Festival and School.
Gohar Vardanyan is sponsored by Strings by Mail.