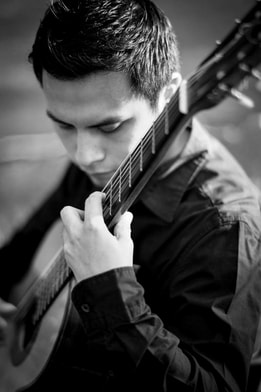 Gerardo Zárate Terrazas is a guitarist from Puebla, México. He has developed an important activity as a soloist, as well as participating in various ensembles and interdisciplinary activities. He has performed in different stages of Mexico and other countries, among which are: Casa del Lago (CDMX), Sala Manuel M. Ponce, Fine Arts (CDMX), Carlos Chavez Room (CDMX), Teatro Principal (Puebla, Ellen Theater (Montana, USA), Palazzo dei Priori (Volterra, Italy), among others. He finished his Master's Degree studies at the School of Music of the UNAM , under the tutelage of M° Juan Carlos Laguna Millán. Also, he has organized concerts, conferences and masterclasses with important artists next to Illiana Peña Hernández in Divertimento-Promotora.

He participated in important seminaries of music with teachers like Isabelle Villey, Javier Hinojosa and PhD. Herminio Sánchez of the Barquera y Arroyo and PhD. Luca Chiantore. He received a Diploma of Merit for his participation in the course given by the M°Paolo Pegoraro (Italy) in the Culiacan International Guitar Festival. In addition, seminarie with Cuban guitarist Ali Arango (Cuba).

In 2013 he was accepted to participate in The Volterra Project (summer guitar institute) directed by the renown guitarist Antigoni Goni, culminating with a concert at the Palazzo dei Priori.
He has participated in national and international guitar competitions in different cities of Mexico. In addition, he played in different opportunities as a solist with orchestras in Puebla.

He has maintained a constant activity in chamber music participating with ensembles such as the Yeixpan Guitar Trio, Guitar Dúo with Mónica Maldonado, Sakbé Duo with the flutist Illiana Peña Hernández, Contemporata Ensamble, directed by the guitarist Carlos Martínez Larrauri. He has also recently participated in projects with flautist María Clara Ocampo (Colombia), flutist Morgan Pappas (USA), guitarist Stuart Weber (USA) and guitarist Ana Santisteban (Spain).
He began his studies at the Conservatory of Music of the State of Puebla at the age of 13. He graduated cum laude from this institution in March 2012 under the tutelage of M° Antonio Rodríguez Delgado (Cuba).