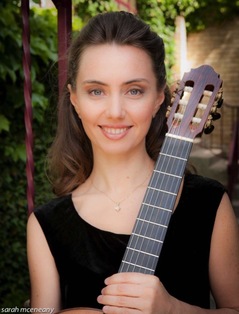 Elina Chekan (Ella) is currently teaching classical guitar at the University of Wisconsin-Milwaukee where she also directs the Suzuki and Pre-College Guitar Program.

A native of Minsk, Belarus, Ella began studying guitar at the age of 13 with Valeriy Gromov. She graduated from Minsk Music College in 1994, and the Belarus Academy of Music in 1999 under Eugene Gridiushko with a degree in Classical Guitar Performance, Orchestral Conducting, and Guitar Pedagogy.

In the year 2000 Ella entered Yale University where she received the Louis and Anne Rosoff award and graduated with a degree in Classical Guitar Performance with professor Ben Verdery.

Combining active performance and teaching careers, Ella has appeared as a soloist, and chamber musician throughout the United States and abroad. Some of this year’s appearances include Chamber Music Milwaukee Series, Brussels Royal Museum of Musical Instrument in Belgium, Tucson Classical Guitar Society, and Mannes College Guitar Festival in New York.

In her teaching Ella believes in the individualized approach to every student with tailored instruction based on student needs. Mrs. Chekan has extensive knowledge of guitar pedagogy and repertoire, and has experienced first hand different guitar schools of thought. Ella is also a certified Suzuki instructor registered with the Suzuki Association of Americas. All this experience allows her to find unique approaches and repertoire for each of her students, giving them a solid foundation in technique and musicianship at an early stage.

Along with conducting Ella has arranged a wide variety of music for solo and chamber music. Since 2005, Ella is on the faculty at “Usdan Center for the Performing Arts” in Long Island, NY. In addition to teaching and performing at USDAN, she conducts the guitar orchestra with up to sixty performers.

In her quest for present-day student repertoire, Ella commissioned composer Jorge Morel to write a series of student repertoire solo and ensemble pieces that is published by Mel Bay. In her believe that young players are our future, Ella is working with musicians and composers encouraging them to write appealing and musically interesting pieces for the young generation of guitarists.

Belarusian guitarist Elina Chekan and Cuban guitarist Rene Izquierdo have been playing as a duo since 2012. The couple first met at Yale University when they were both pursuing post‐graduate degrees, studying with acclaimed professor Benjamin Verdery. Duo Exaudi was created out of the desire of both guitarists to join forces in their creative endeavors, and work towards increasing and exploring the guitar repertoire in this new medium.

As a duo they have performed in major concert venues in the United States, Russia and Europe to great critical acclaim. Both award winning artists, they are together a tour de force. Duo Exaudi’s commitment to contemporary music and to the expansion of the guitar repertoire has led them to collaborations with composers such as Jorge Morel, Carlos Rafael Rivera, Colette Mourey, and Carl Schimmel.

raised for their phrasing and musical sensitivity, Duo Exaudi’s playing is technically superb, well balanced and exceptionally musical. Their debut CD will be released in the Spring of 2014. They are both currently faculty at the University of Wisconsin‐Milwaukee.