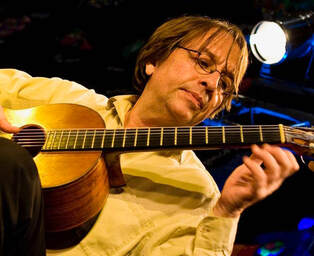 A richly gifted composer, improviser and guitarist, Dušan Bogdanović
has explored musical languages that are reflected in his style today- a unique synthesis of classical, jazz and ethnic music. As a soloist and in collaboration with other artists, Bogdanović has toured extensively throughout Europe, Asia and the United States. His performing and recording activities include work with chamber groups of diverse stylistic orientations including The Falla Guitar Trio and jazz collaborations with James Newton, Milcho Leviev, Charlie Haden, Miroslav Tadic, Mark Nauseef, Anthony Cox and others. He has over fifty published compositions ranging from guitar and piano solo works to chamber and orchestral ensembles (Berben, GSP, Doberman-Yppan et al.), as well as close to twenty recordings ranging from Bach Trio Sonatas to contemporary works (Intuition, GSP, Doberman-Yppan, M.A. Recordings et al.).

Among his most recent commissions are a ballet- poeme Crow, premiered by the Pacific Dance Company at the Los Angeles Theater Center; Sevdalinka, written for the Newman- Oltman Guitar Duo with the Turtle Island Quartet, premiered at Merkin Hall, New York; Canticles, composed for the Gruber- Maklar Duo; a mix media piece To Where Does The One Return, for sixteen ceramic gongs in collaboration with sculptor Stephen Freedman, premiered in Hilo, Hawaii; Games, commissioned by the BluePrint Festival and dedicated to David Tanenbaum and Nicole Paiement; Byzantine Theme and Variations, premiered by James Smith with the Armadillo String Quartet, as well as works written for pianist Fabio Luz and numerous solo guitar compositions written for Alvaro Pierri, David Starobin, William Kanengiser, Scott Tennant, Eduardo Isaac, James Smith and others.

Bogdanović was born in Yugoslavia in 1955. He completed his studies of composition and orchestration at the Geneva Conservatory with P. Wissmer and A. Ginastera and in guitar performance with M.L.São Marcos. Early in his career, he received the only First Prize at the Geneva Competition and gave a highly acclaimed debut recital in Carnegie Hall in 1977. After having taught at the Belgrade Academy and San Francisco Conservatory (1990-2007), he is presently engaged by the Geneva Conservatory. He also maintains residence at the island of Hawaii.

His theoretical work for guitar, at Berben Editions, includes Polyrhythmic and Polymetric Studies, as well as a bilingual publication covering three- voice counterpoint and improvisation in the Renaissance style. His latest book Ex Ovo, a collection of essays for composers and improvisers published by Doberman-Yppan, is soon to be followed by Harmony for Guitar, which is in preparation by the same publisher.