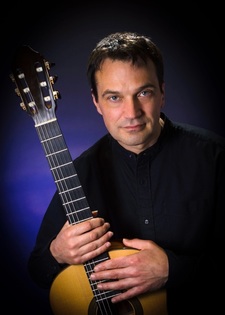 David Jaggs is best known for his highly successful range of eight “easy listening” albums which have sold well in excess of 100,000 copies. Over the last twenty years he has made over 2000 appearances marketing and promoting his work in a variety of “unusual” ways.

David also has his own record label, “Timespan Recordings” featuring artists David Miller, (Baroque Lute) (I think it is a worthwhile addition that soon will belong to your favourite Weiss CDs. Both (lutes) sound wonderfully full, round and warm.” Lute and and Early Guitar Society of Japan.  “…the disc is an exceptionally engaging Weiss recording… what wonderful expressiveness and musical intelligence David Miller brings to this music….” Chris Goodwin, Lute News.)  Robert Brightmore (classical guitar) and most recently with Antigoni Goni on an important new album, “Hymn to the Muse” to be released in the Spring of 2016.

David Jaggs attended the Guildhall School of Music and Drama in London under the direction of Antonio Albanes. After graduating with distinction David was privileged to become a private student of Manuel Barrueco at his home in New Jersey, USA during 1987 and 1988.