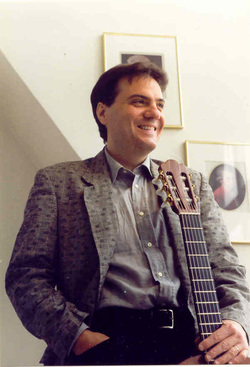 Carlo Marchione was born in Rome in 1964. He is regarded by audiences, press and experts alike as one of the best guitarists of the new generation. He has been awarded many top prizes in International competitions (Ancona 1979/80, "L. Legnani" Parma 1981, "M. Guiliani" 1982, "Ville de SablÈ" 1985, Gargnano 1989, "N. Paganini" 1991, "Città di Latina" 1992) and is now a regular guest at Festivals throughout Europe (Italy, Spain, France, Holland, England, Czech Republic, Germany, Austria, Rumania, Ukraine, Poland, Russia, Sweden, Croatia) appearing both as soloist and with orchestra and various chamber ensembles.
While touring Russia in 1997 he was invited to perform in the prestigious Main Auditorium of "Tchaikowsky Conservatory in Moscow" as well as in the Philharmonia of St. Petersburg, an honour very rarely bestowed upon a guitarist. Both concerts were sell-outs and received standing ovations. In October 1998 he gave his debut in the "Berliner Philharmonie".

He started taking guitar lessons from the age of 10 with by Master L. Cauzzo, and later on with L. Galuzzi. In 1976 he entered the local Conservatorio Santa Cecilia in his native town, passing the entrance exam in 1st place out of 100 applicants. There he studied with Master Mario Gangi, graduating with honours in 1983.
A proponent of early music, he has also studied Renaissance and Baroque style with Masters Betho Davezac and Toyohiko Sato. Carlo Marchione teaches at the Conservatory Maastricht in Holland.