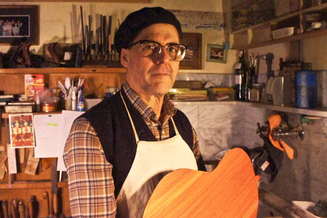 Born and raised in Florence, Italy, from an early age Andrea Tacchi took an interest in creating musical instruments, building his first guitar at age 15. In 1977 he began studying guitar making with Argentinian luthier Ricardo Brané. After Brané’s death, Tacchi traveled to Spain, England, France, and the United States to study with various masters, going in 1981 to Spain to meet with many Spanish luthiers including Paulino Bernabe Senior, José Ramírez, Francisco and Gabriel Fleta to get their critical opinions and advice on his guitar making. With the same goal in mind, he went twice to England to consult with José Romanillos.

Most importantly, during the early 1980s Tacchi went several times to Paris to visit with Robert Bouchet and Daniel Friederich in their workshops, always with the objective in mind of growing as a luthier through their advice. It was in Castres, France in 1985 that Andrea Tacchi competed in the Concours International des Facteurs de Guitare organized by Robert Vidal of Radio France. There he won first prize for Aesthetic Qualities and second general prize for Acoustic Qualities.

Experienced in the restoration of guitars and other antique string instruments, Tacchi has carried out such restorations as the Pagés guitar of Jacob Lindberg, string basses for musicians of the Teatro Comunale di Firenze, and a classical guitar built by Hermann Hauser.
​
Andrea Tacchi has built over 350 guitars, some owned by guitarists including Filomena Moretti, Flavio Cucchi, Carlo Marchione, Antigoni Goni, Robert Gruca, Colin Davin, Minoru Inagaki, and Marcelo Kayath, while others belong to important private collections. Two of his guitars are in the collection of the Conservatorio Luigi Cherubini in Florence, Italy.