The Belgian guitarist and composer Benoît Ducène convinced our jury that described this composition as "A wittyful chamber music work for guitar quartet, full of character and spirit, of which we are sure it will provide lots of musical fun for both performers and audience."

In Benoît Ducène's words, Humoristango claroscuro  "is a clear reference to Piazzolla’s Tango Nuevo, It is a blend of humor and melancholy, somehow deconstructing the rhythms of Tango Nuevo while touching the deepness of Argentina’s dark history, expressed through music like the maestro did beautifully so many times.
It expands the range of the guitar and uses many effects available to the guitar players in order to achieve the intended expressions."

Humoristango claroscuro was premiered  on 19 July 2019 at the Palazzo dei Priori in Volterra. 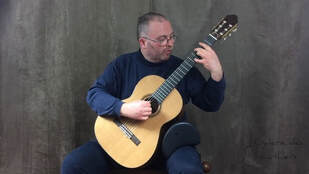 His mentor Johan Fostier showed him the way to musical interpretation, while Pavel Steidl and Ricardo Gallén also truly marked his musical ideas.
Moreover, Benoît Ducène attended master classes by the pianists Tamas Vasary, Anne Queffélec, and Alfred Brendel. He also got more familiar with baroque music attending Vincent Dumestre’s master classes.
Besides, he won several competitions in Belgium (1st Prize Pro Civitate and Jaworski) and was awarded 3rd prize at the Salmaso international competition in Viareggio (Italy) with Guitarreando Trio. He was also a finalist at Hinojosas de Calatrava’s competition in Spain.

Bach, Debussy, Satie, Takemitsu and Piazzolla deeply influenced his composing work - for solo guitar or chamber music with guitar - leading him to write very different styles of music. He met with Dusan Bogdanovic, Leo Brouwer, Roland Dyens, Egberto Gismonti, Erik Marchelie, and Marco Smaili - composers who all went beyond the traditional boundaries of his instrument’s repertoire. Some of his works were premiered in Spain and Italy. He scored high at the Barsacchi competition for composers in Viareggio.

He regularly performs both as a soloist and as a chamber music player.