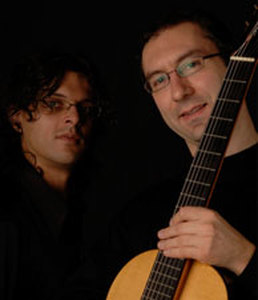 Giampaolo Bandini-Cesare Chiacchiaretta duo, guitar and bandoneon, takes shape in 2002 with the precise aim to propose the music coming from Argentina throughout the charme and fascination of its most representative instruments.
The duo immediately becomes an important point of reference in the international music outline thanks to their great comunicative power join to an extraordinary charisma
Invited by the most important festivals and theatres all over the world, the duo has toured Mexico, Romania, China, Polonia, Slovacchia, Austria, German, Spain, Switzerland, France, Belgium, Holland, Croazia, Russia, Slovenia, Turkey, Czech Republic, Ungheria, gaining everywhere an extraordinary approval of audience and critics.

The duo has had the big honour to play the Double Concerto “Hommage a Liegi” by Astor Piazzolla conducted by M_Leo Brouwer in Auditorium Paganini of Parma and for Unione Musicale of Turin with the well-known chamber orchestra “I Virtuosi di Mosca” conducted by Pavel Berman.

In 1995 the duo has its debut in the prestigiuos Great Hall of San Pietroburgo Philarmonic, gaining such a big success to be immediately invited the following two years.

Their specific feature to live the music with no borders brings them to work together with artists like Arnoldo Foa’, Elio delle Storie Tese, Amanda Sandrelli, Nando Gazzolo and musicians like Fernando Suarez Paz, Michele Pertusi, Corrado Giuffredi, Danilo Rossi, Massimo Quarta, Enrico Bronzi, Franca Masu, Maria Estela Monti, Enrico Fagone and many others.
Their first cd “Hombres de Tango” has sold more than ten thousand copies and has been welcomed with great enthusiasm from the specialized critics.

The duo has recorded radio and TV shows for the most important italian and foreign stations. Recently a concert of the duo happened in Bruxelles has been broadcasted via satellite in more than twenty countries.

As teachers, besides being invited from the most famous Academies and Universities, they regularly theach in the Institutes of High Education“Luigi Boccherini” in Lucca and “Tito Schipa” in Lecce and in the summer Festivals of Gubbio and Portogruaro.